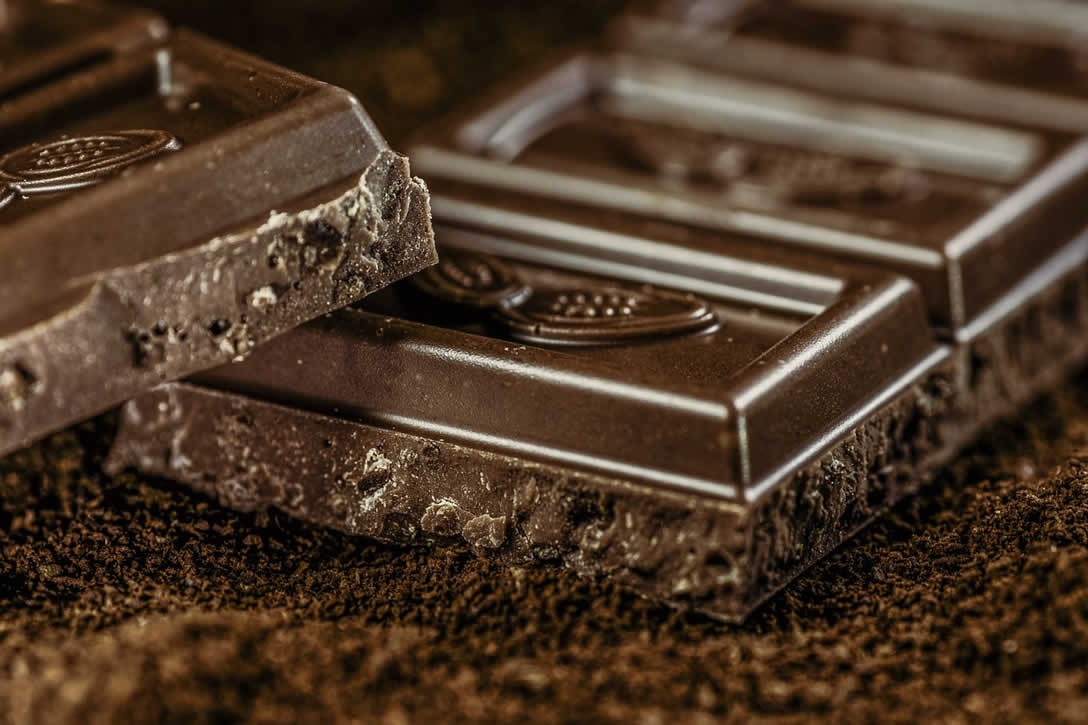 Dark chocolate/cocoa (Chocolate/Cocoa) originated from the ancient Mayan civilization and was originally a drink made by local people grinding cocoa beans into the mud and adding water and spices. After drinking it, it strengthens energy and treats diseases. The magical effect so-called the food of the gods.

Do you know dark chocolate’s benefits and side effects?

The reason why dark chocolate/cocoa lasts for a long time. In addition to its unique sweet, rich, smooth taste, modern science has also found that it is rich in a variety of plant antioxidants-flavonoids (flavonoids are far better than red wine and tea).

What is the difference between dark chocolate and cocoa?

Dark chocolate/cocoa are two products with similar properties. Generally referred to as cocoa is the solid form of cocoa beans (taken from the seeds of cocoa beans) after grinding into cocoa butter.

The fat-removing cocoa solids are dried and pulverized into a cocoa powder known as cocoa powder. The favorite chocolate is made by adding cocoa butter and sugar to the cocoa powder (as for 72% and 90% marked by chocolate, it refers to the relative concentration of cocoa in the product, for example, 90% means there is 90% of the ingredients are cocoa powder plus cocoa butter, and the rest are sugar and spices)

What are the benefits recommended by dark chocolate/cocoa?

According to statistics from the World Health Organization (WHO), approximately 17 million people die of cardiovascular diseases each year.

A literature review and meta-analysis (including 16 epidemiological studies with a total of 344,453 participants) pointed out that compared with the group with the smallest chocolate intake, more intake can reduce the risk of cardiovascular disease by about 29%, And especially the female group has the most protective effect.

It should be noted that higher than average intake will increase the risk, which is related to obesity caused by excessive calories.

The underlying mechanism may be related to the improvement of blood pressure, blood lipid regulation, anti-inflammatory, and promotion of vascular endothelial cell function possessed by flavonoids in chocolate.

Obesity is defined as a state of abnormal or excessive accumulation of fat in adipose tissue, and to a degree that affects health.

A literature review and meta-analysis (including 35 randomized controlled trials, a total of 1775 participants) pointed out that under the condition of daily dose ≥ 30 g, duration (4 to 8 weeks), the intake of cocoa/dark chocolate Can significantly reduce body weight and body mass index.

The underlying mechanism may be related to the improvement of insulin sensitivity, the reduction of gene expression involved in lipid synthesis, the increase of thermogenesis, the inhibition of pancreatic lipase and amylase, and the regulation of appetite hormones.

*Conclusion: Ingesting cocoa/dark chocolate within a specific amount for a short period of time is positive for weight control, but because it is a high-calorie food, high-dose long-term use should be carefully considered.

In recent decades, one of the hidden worries brought about by technological progress is one of the physical insufficiency caused by sedentary, mainly due to the development of the Internet, so that people can get all the needs in life without getting up and moving, whether it is This is true for work, education, and entertainment.

The health problems caused by prolonged sitting are second only to smoking. Not only is the obesity rate rising, but also the incidence of various chronic diseases, such as cardiovascular disease, stroke, cancer, diabetes, hypertension, osteoporosis, etc.

A double-blind controlled study found that (for a period of 3 months, the subject was 20 middle-aged people who often sedentary), ingestion of dark chocolate can help increase the maximum oxygen uptake (VO2 max, 17%) and strength output. In addition, it was also found that the subject’s high-density cholesterol increased and reduced triglycerides.

The underlying mechanism is believed to be related to the flavonoids in chocolate that can promote cell metabolism, improve mitochondrial function, and reduce oxidative stress.

It is the dream of most women to have fair and flawless skin without wrinkles, but the speed of maintenance seems to never catch up with the pace of aging.

Since aging is unavoidable, but friends of the same age seem to be younger. Medicine has found that in addition to genes, 90% of skin aging is caused by sunlight ultraviolet damage.

Ultraviolet rays can easily damage the collagen of the skin, cause wrinkles to appear early, and also form melanin, produce spots, and more seriously, cause cell lesions and cause skin cancer. Therefore, it is very important to learn natural sunscreen methods.

It is currently found that cocoa has the effect of resisting sun damage and slowing down the occurrence of wrinkles. A study on middle-aged and elderly women (the skin has obvious photoaging and wrinkles).

After taking 4 g of cocoa drink (providing 320 mg of cocoa flavanol) daily for 24 consecutive weeks, it was found that skin elasticity increased by 9% (wrinkle did not increase significantly), but crow’s feet in the placebo group increased by 8%.

Another study also showed that cocoa drinks can improve the skin’s resistance to sunlight, and double the Minimal Erythema Dose (MED), making the skin less susceptible to UV damage.

p.s. Minimal Erythema Dose (MED) is an index that measures how much UVB exposure is needed to make the skin erythema.

5. Dark chocolate is good for brain function and mental capacity

With the gradual growth of age, in addition to the deterioration of physiological functions (such as physical fitness), most people often feel that it is difficult to learn new things, it is difficult to maintain concentration, the ability to recall is poor (such as names, telephones), and the ability to handle things Slow down, etc. Most of these situations are not caused by disease but belong to the normal mental aging phenomenon.

Compared with mental aging, most people are more tolerant of the fact that physiological function deteriorates. It seems that mental aging is taken for granted. The following findings help to reverse this idea.

In the study, it was found that whether dark chocolate or cocoa products are taken for a short or long time, it has the effect of increasing mental intelligence, transaction processing ability, working memory, visual information recognition ability, and can also reduce mental deterioration associated with aging.

The mechanism behind cocoa improving brain function is initially believed to be related to improving blood flow to the brain after taking it.

Hypertension is a common disease of the elderly. Except for a few causes of secondary hypertension caused by the disease (such as chronic kidney disease, thyroid problems, aortic stenosis, sleep apnea syndrome), others are of high primary origin for unknown reasons Blood pressure (Primary Hypertension).

Most patients who know that they have high blood pressure do not feel comfortable because they do not feel uncomfortable and worry about the side effects of taking medication. The long-term out of control of blood pressure results in vascular sclerosis, causing a sudden stroke, myocardial infarction, etc. Life-threatening diseases.

According to an epidemiological observation in the Netherlands, if you can get more flavonoid phytochemicals from cocoa or dark chocolate in your daily diet, you can reduce the incidence of hypertension.

Other large-scale observations have also found that the antihypertensive effect of ingesting cocoa or dark chocolate may not reduce (systolic blood pressure of 4.7 mm Hg) and (diastolic blood pressure of 2.8 mm Hg) without losing to commonly prescribed drugs (such as beta-blockers). The antihypertensive mechanism may be related to flavanols stimulating endothelial cells to produce nitric oxide and achieve blood vessel relaxation.

However, proper pressure is actually an important key to maintaining human survival. If there is no stress response, it will become helpless in the face of any emergency, unable to respond immediately (deciding whether to escape or get up to fight), if it is in ancient times, it may be directly Beast eaten.

A study on students (with the pressure to enter college) found that polyphenols in chocolate can reduce stress hormones and have a pressure-relief effect. Other studies speculate that the reasons for pressure-relief may be related to antioxidant efficacy and promotion of serotonin production.

What are the side effects of dark chocolate/cocoa?

It is found in the known scientific literature that edible dark chocolate/cocoa has high safety and few side effects. Studies have indicated that ingesting high doses of cocoa flavanols for 3 consecutive months has been found to be well-tolerated and did not appear Any abnormal blood biochemical values.

However, if the caffeine and theobromine contained in cocoa are taken too much, it may cause heartburn, insomnia, arrhythmia side effects, and may also interfere with the effects of certain psychoactive drugs (such as monoamine oxidase inhibition MAO inhibitors).

In addition, some of the amino acids in cocoa (tyramine, phenethylamine) are considered to be migraine-causing chemicals, but in the current study, there is no large and well-documented study that can confirm the consumption of dark chocolate/cocoa Will cause migraine, so there is no need to worry too much.

The benefits of consuming dark chocolate/cocoa are really many, but there is no precise report on how many doses to eat to achieve disease prevention effects, and because each product has a different manufacturing method, it contains different plant flavonoids

Therefore, it is discouraged to eat dark chocolate and cocoa in order to promote health, because most of these products on the market contain high sugar content, and eating more will only offset the benefits. The correct way is to eat in moderation and choose additives less (such as sugar) can bring health benefits.