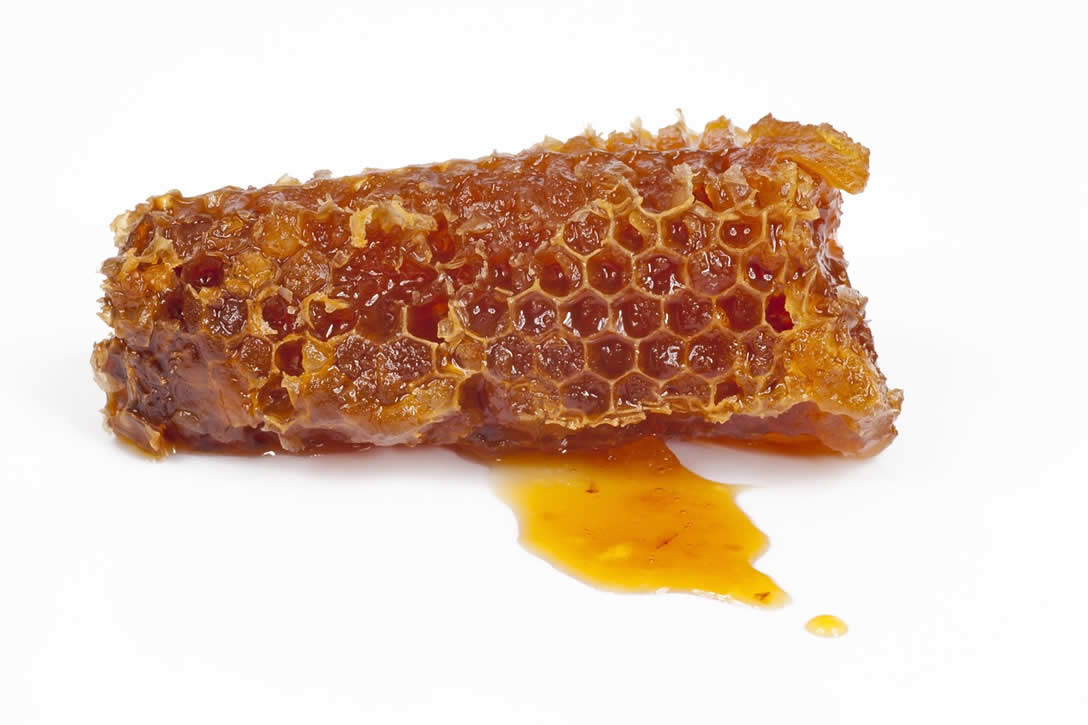 Propolis is one of the secrets that honeybees can survive for hundreds of millions of years on earth (others still contain honey, royal jelly, and bee pollen). As early as 300 BC, humans have begun to use propolis. Records show that propolis is used as a medicine in many parts of the world, including internal and external use.

The word propolis comes from Greek, where Pro means “in front of” and polis means “community” or “city”, which together means defensive substances

Do you know propolis benefits and side effects?

Propolis is a natural non-toxic substance formed by worker bees collected from plant secretions, such as mucus, gum, resin, and then mixed with its own secretions and beeswax. The texture is waxy. Depending on the type of plant being collected, the color may be Green, brown, or reddish.

In addition to being used to build and repair honeycombs, propolis can also prevent moisture from entering the hive, maintain a constant humidity and temperature, and also control the airflow to the hive.

In addition, propolis can also be used as an antibacterial agent to prevent larvae, honey, and honeycomb from being attacked by external microorganisms. It can be said to be the best chemical weapon.

What are the benefits of propolis?

1. Propolis is good for menstrual pain

Dysmenorrhea is defined as uterine-induced painful spasms during menstruation, which is one of the causes of pelvic pain and menstrual disorders. About 45% to 93% of women of childbearing age suffer from menstrual pain, which is caused by adolescents. The highest rate.

*Conclusion: For primary menstrual pain, oral propolis is helpful for relieving symptoms, but it is limited to a small number of samples, and more large studies are still needed to corroborate it.

Diabetic foot ulcers are a common complication of diabetes, and their morbidity, mortality, and medical costs are very high.

A randomized placebo-controlled study (for 8 weeks, with 31 patients with diabetic foot ulcers) pointed out that the local use of propolis can reduce the wound area compared to untreated subjects.

*Conclusion: Topical topical propolis has a positive effect on the care of diabetic foot ulcers, but it is limited to a small number of samples and more research is needed to support it.

3. Propolis is good for common colds

Common colds are the most common human diseases and are the terms traditionally used for mild upper respiratory illnesses, including a group of heterogeneous self-limiting diseases caused by many viruses (the relevant viruses are More than 200, still constantly changing, coronaviruses usually cause more severe symptoms than rhinoviruses).

In addition to affecting the quality of life, the common cold will also bring a huge economic burden to society due to work absence (70 million working days in the United States are caused by non-influenza-related viral respiratory infections, equivalent to 8 billion US dollars Indirect costs, which account for 40% of all work lost)

A prospective multi-center epidemiological study pointed out (7 days, 40 children with acute rhinitis and common cold symptoms) pointed out that the use of propolis nasal spray (3 times a day) can improve cold symptoms and overall quality of life.

*Conclusion: The use of propolis spray has a positive effect on the relief of colds, but it is limited to a small number of samples, and more research is still needed to further verify

Diabetes mellitus is a chronic and progressive disease characterized by insulin resistance, islet cell dysfunction, and excessive glucose production by the liver.

There are currently more than 284 million people worldwide with diabetes, and this number is expected to reach 439 million by 2030. If not handled properly, it can lead to many health complications and disabilities.

A systematic literature review and meta-analysis (including 6 randomized controlled trials, a total of 373 adults with type 2 diabetes) pointed out that propolis supplementation (daily doses between 226 and 1500 mg, the minimum and maximum duration of intervention 56 and 180 days) can significantly reduce the concentration of fasting plasma glucose (-13.51 mg/dl) and glycated hemoglobin (hemoglobin A1C, -0.52%) (but there is no significant improvement in fasting insulin level or insulin resistance status).

*Conclusion: Oral propolis may have a positive effect on blood sugar control, but it is limited by too few studies, too short a dry expectation, and possible methodological errors. More studies are needed to corroborate.

Oral Mucositis refers to the inflammatory state of the oral cavity and oropharyngeal mucosa of cancer patients after receiving chemotherapy and/or radiation therapy.

Oral mucositis initially manifests as erythema of the oral mucosa, and then often develops into erosions and ulcers (usually covered by white fibrous pseudomembranes).

A literature meta-analysis (including 5 randomized controlled trials, a total of 209 cancer patients undergoing chemical or radiotherapy treatment) pointed out the use of propolis mouthwash (2-3 times a day, 5-15 ml each time, continuous 7 to 180 days) the incidence of severe oral mucositis was significantly lower than the control group.

Conclusion: Propolis mouthwash is positive for improving severe oral mucositis caused by radiotherapy, but it is still limited by the small sample size, excluding studies other than Chinese and English, and more large-scale trials are still needed to corroborate.

Wound repair is a very complex mechanism in the human body. It is a series of cell-molecule-guided processes of hemostasis, inflammation, cell proliferation, and tissue remodeling. This includes the migration and spread of epidermal cells and keratinocytes, fibroblast adhesion, and synthesis. Extracellular matrix proteins, connective tissue remodeling, etc.

However, for certain traumas, such as diabetes, chronic infections, burns, and large wounds, wound management must be cautious, and reducing wound infection is the first priority.

A prospective feasibility study (6 weeks, targeting 24 patients with diabetic foot ulcers) pointed out that applying propolis solution to the local wound area can reduce the ulcer area and accelerate the speed of wound healing.

*Conclusion: Topical application of propolis may have the effect of accelerating wound healing, but the results still need to be confirmed by more large-scale controlled trials.

For a long time, cardiovascular diseases have been considered to be mainly male diseases. However, relevant studies have found that women’s relative risks are actually higher, especially morbidity and mortality.

Women with diabetes, hypertension, hypercholesterolemia, obesity, and other symptoms are more likely to suffer from cardiovascular disease than men. In addition, depression is another important independent factor.

*Summary: Propolis can enhance the antioxidant effect and high-density good cholesterol and has potential anti-cardiovascular disease effects, but more empirical confirmation is needed.

Otitis media is a common bacterial infection in children. It is estimated that about 50% to 85% of young children will experience acute otitis media once before the age of 3, and the prevalence period is usually between 6 and 15 months.

Young children are more susceptible to otitis media due to their physiological structure, which may include shorter eustachian tubes, more elasticity, and a more horizontal position, which makes it easier for pathogens to invade.

The Eustachian tube usually does not mature until 7 years old, which explains the declining incidence after this age, and the immune system is also an important factor.

A controlled study (a period of 3 months, for 122 young children under 5 years old) found that propolis solution (additional addition of zinc) can help reduce the number of recurrent acute otitis media and the use of related drugs (antibiotics).

Genital herpes (HSV) is the fourth most common type of sexually transmitted disease, affecting billions of people around the world, and there are mainly two types of viruses that cause diseases, which are divided into type 1 and type 2 simple herpes. Rash virus.

The incidence of genital herpes in most countries is between 2-74%, and the difference is very large. In some African countries, the prevalence rate is more than 70%, which not only increases the risk of AIDS infection but also increases the rate of HIV transmission.

A controlled study pointed out that the efficacy of propolis ointment in the treatment of genital herpes lesions and local symptoms is not lost to acyclovir/acyclovir (herpes treatment drug) and placebo, and the incidence of repeated infections is also reduced to 55% (compared to 66% of the preliminary review).

Gingivitis is an early and easily treatable periodontal disease. It is estimated that more than 50% of adults have this phenomenon, usually caused by the plaque biofilm on the edge of the gums (plaque).

If the plaque is left untreated, it will cause periodontal inflammation and even periodontal disease in the long term. The most serious is the loss of teeth.

A double-blind controlled study on the relationship between gingivitis and mouthwash (a 28-day, 60-sample sample) found that mouthwash containing propolis was helpful compared to medicated mouthwash (0.12% chlorhexidine) and placebo Lowering the Papillary Bleeding Score (an indicator of gum condition) means that it can improve the gum inflammation.

Are there any side effects of propolis?

Propolis has been used by humans for hundreds of years. It is a safe natural substance (whether oral or external), but possible side effects include allergic reactions, such as rash, local burning, gastrointestinal discomfort, and other allergic symptoms (but allergies may also be used after use Only appeared after a while).

Where to buy propolis capsules recommended by most people? 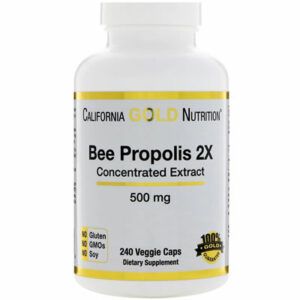