Resveratrol is a kind of polyphenolic antioxidant, mainly in grapes, berries, peanuts, and other fruits are an antiviral secreted by plants, used to fight trauma, bacteria, infections, ultraviolet rays, etc. External pressure can be said to be the patron saint of plants.

Do you know resveratrol’s benefits and side effects?

In particular, resveratrol is famous around the world because of a French Paradox discussion in the 1990s. At the time, it was believed that French people who ate fatty foods were not susceptible to cardiovascular disease because Frequently consumed red wine contains resveratrol.

Since then, resveratrol has been continuously found to have potential health benefits, including anti-aging, anti-diabetes, anti-cancer, anti-dementia, etc., but most of them are still animal studies, and the relevant human body verification is still insufficient.

Resveratrol is generally divided into cis and trans isomers, but the trans is more stable (Trans-resveratrol is the most common in nature), and many effects are only seen in the trans (such as regulating inflammation pathways and anti-proliferative) Therefore, it has become the mainstream of health care ingredients and the main research target.

What are the benefits of resveratrol?

Hyperlipidemia can be roughly divided into elevated cholesterol, elevated triglycerides, or both. It is one of the components of metabolic syndrome. It is associated with obesity, type 2 diabetes, and high Blood pressure, coronary heart disease and stroke are closely related.

The cause of hyperlipidemia may be genetic, it may be environmental, or it may be both.

A systematic literature review and meta-analysis (including 21 randomized controlled trials involving 949 adults) pointed out that the use of resveratrol failed to significantly improve blood lipid-related values ​​(such as total cholesterol, high and low-Density lipoprotein cholesterol, and triglycerides).

*Conclusion: As of now, oral resveratrol has no obvious effect on the improvement of hyperlipidemia.

Type 2 diabetes is a common multifactorial genetic syndrome, which is determined by several different genetic and environmental factors. Currently, 150 million people worldwide are affected by the disease, and due to secondary factors such as obesity, high blood pressure, and sedentary lifestyles, the attack rate is rapidly increasing.

A systematic literature review and meta-analysis (including 9 randomized controlled trials with a total of 283 participants) pointed out that resveratrol supplementation can improve fasting blood glucose (-0.29 mmol/l) and insulin resistance in diabetic patients Index and insulin level (-0.64 U/mL).

In addition, subgroup analysis shows that the daily dose of resveratrol greater than 100 mg has the most significant effect on reducing fasting blood glucose.

*Conclusion: The use of resveratrol can positively help blood glucose control in patients with type 2 diabetes, but the limited number of samples and possible errors still need to be confirmed by more large randomized controlled trials.

It is estimated that about one-third of the total population in the Western world and Asia currently suffers from this disease. The symptoms may include right upper abdominal pain, fatigue, hepatosplenomegaly, etc. Although changes in lifestyle, calorie intake restriction, and weight loss. There is positive help, it is often difficult for most people to achieve.

Resveratrol is regarded as a savior against fatty liver because of its anti-inflammatory, anti-oxidant, and calorie restriction-like effects.

A recent systematic literature review and meta-analysis (including 4 clinical trials, 158 participants) pointed out that resveratrol does not have any positive effects on liver fibrosis and fatty liver-related disease parameters (such as AST, ALT) The impact, that is, the evidence is still insufficient.

*Conclusion: As of now, the use of resveratrol has not been found to be positive for non-alcoholic fatty liver.

Cancer is still the top ten cause of death in most countries. Each year, 1.6 million people in the United States become newly diagnosed cases and the incidence rate increases with age.

Radiation and chemotherapy are the most common cancer treatment options, but the resistance of cancer cells to anti-cancer drugs often results in unsatisfactory treatment effects.

A systematic review pointed out that, based on availability in vitro and in vivo studies, resveratrol can produce apoptosis-promoting, anti-proliferative and anti-inflammatory effects on cancer cells, and can be used as an anti- A sensitizer for cancer drugs to enhance the effectiveness of anti-cancer treatment.

*Summary: Although resveratrol has shown good anti-cancer effects in many in vitro and in vivo experiments, it still lacks large-scale human trials, so its dosage, effectiveness, and safety have yet to be confirmed.

Coronary heart disease (ie, angina pectoris and myocardial infarction) is the most common type, which is common in men between 40 and 60 years old, and women mostly occur after the age of 50. It is the main cause of sudden death (about 70% of total deaths from heart disease).

In a 6-month study of 34 patients with metabolic syndrome, it was found that taking resveratrol (100 mg daily) improved vascular health indicators compared to placebo: endothelial cell relaxation Function (flow-mediated dilation), but other blood values ​​have not changed.

In addition, it was found in a double-blind controlled study (sample number 75, one-year experimental period) that taking resveratrol can not only significantly improve a variety of inflammatory factors, including C-reactive protein (CRP), tumor necrosis factor (TNF- α), can also reduce the factors that cause thrombosis: fibrinolytic plasminogen activator inhibitor type 1 (PAI-1), or may be used as a gold component to prevent cardiovascular disease.

Generally, there will be more than one aging path in the brain. After reaching old age, if the physical and mental conditions are normal, under normal aging, cognitive function usually begins to decline after the age of 80. The other path is related to dementia, which is characterized by the destruction of brain cells, which can easily cause memory and cognitive impairment after a long time, and even unable to take care of themselves.

The most common type of dementia in the elderly is Alzheimer’s Disease. The main pathological feature is the accumulation of amyloid-beta peptide outside the nerve cells, which causes abnormal cell function and necrosis. Neurofibrillary tangles formed by excessive aggregation of tau protein.

In animal experiments, it was found that giving resveratrol to experimental rats can not only extend the average lifespan, but also reduce the polymerization of beta-amyloid and tau protein, which has the effect of protecting nerve cells and slowing cognitive degradation, but related human research To be confirmed.

It was found in a small study (for middle-aged and middle-aged people overweight and between 50 and 75 years old) that taking resveratrol (200 mg daily for 26 weeks) not only improved blood glucose metabolism and body fat but also helps improve memory performance (recalls more words heard 30 minutes ago) and hippocampus connection function/functional Connectivity (forms an important block of long-term memory).

Choroidal neovascularization is the most complicated complication (wet lesion) in macular degeneration. These new abnormal blood vessels often cause macular edema, retinal pigment epithelial cell degeneration, and even retinal detachment. If not treated in time, it will cause blindness.

The vascular endothelial growth factor VEGF inhibitor is currently the main treatment for the treatment of wet macular disease, which can slow abnormal angiogenesis and visual degradation.

A preliminary study found that resveratrol has an inhibitory effect on the vascular endothelial growth factor VEGF and slows down choroidal neovascularization (caused by the inflammatory hormone TGF-β or tissue hypoxia), which may improve the disease process of macular degeneration.

In addition, other small studies have found that resveratrol (after 1 hour of taking) helps to increase the thickness of the choroid (increased blood flow and slowed the chance of macular degeneration) (compared to the placebo group).

But so far, there is no research directly confirming the relationship between resveratrol and age-related macular degeneration, so further confirmation is needed.

So far, the scientific community believes that the most effective way to extend human life is through caloric restriction, which means limiting daily calorie intake by 20-40%, but under balanced nutritional conditions.

In many studies in Zhongzhong, various species that limit caloric intake have also been shown to significantly extend lifespan (up to 60%). Note13, although long-term studies on humans have not yet been released, preliminary evidence can be determined, and the results should be eight or nine Never leave ten.

Resveratrol has found in some studies that the disease resistance and life extension mechanism produced are similar to caloric restriction (can activate the sirtuin 1 longevity gene).

Therefore, in an animal control study (both groups were fed high-calorie foods), the rats who ingested resveratrol can greatly improve survival and reduce mortality by 31% (in addition to increasing insulin sensitivity, lowering blood sugar, improve the productivity of mitochondria, improve the activity, etc.).

However, the effect of resveratrol on human life extension has not been finalized, so it is still to be confirmed by more large-scale and accurate research in the future.

Ulcerative colitis is a type of inflammatory bowel disease. The main clinical symptoms include hemorrhagic diarrhea and abdominal cramps. It is a chronic inflammation caused by immune dysfunction (intestinal mucosa is the main affected area), and the patient also has There is a higher incidence of bowel cancer.

At present, it is believed that oxidative stress and free radicals play an important role in the cause and deterioration of the disease, and resveratrol has excellent scavenging ability for active oxygen and therefore has become the subject of many studies.

A double-blind controlled study (a 6-week study of 56 patients with mild to moderate ulcerative colitis) found that taking resveratrol (500 mg daily), in addition to helping reduce the concentration of malondialdehyde, can also increase The body’s total antioxidant capacity and the concentration of superoxide dismutase (SOD, an antioxidant).

In addition, the resveratrol treatment group also had significant improvement in disease activity and quality of life (compared to the placebo control group).

What are the side effects of resveratrol?

Resveratrol is still an emerging health ingredient. So far, there are still few large-scale human trials, so the exact effective dose and safety concerns (side effects) have not been established.

A human study (29 days) found that taking a large dose of resveratrol between 2.5 g and 5.0 g daily may produce mild gastrointestinal discomfort symptoms (including nausea, flatulence, abdominal discomfort, and diarrhea) (Symptoms appear 2 to 4 days after starting to take and occur half an hour to 1 hour after ingestion).

Do not use for pregnant women, nursing mothers, children, and those with liver and kidney dysfunction (because safety is unknown).

May have anticoagulant effects, so do not take it with related anticoagulant drugs (such as warfarin, heparin), antiplatelet drugs (dipyridamole, clopidogrel), nonsteroidal anti-inflammatory drugs (NSAIDs).

Resveratrol may interfere with enzymes related to metabolic drugs in the liver (such as cytochrome P450, CYP1A2), which in turn interferes with the effects of many common drugs, which may cause unknown risks to the person taking the drug, so it should be avoided in combination with drugs or herbs, or consult before use Qualified doctor or pharmacist.

May have a slight estrogen effect, for safety reasons, patients with estrogen-sensitive diseases (such as breast cancer, ovarian cancer, uterine cancer) should avoid taking it.

Where to buy resveratrol health products recommended by most people? 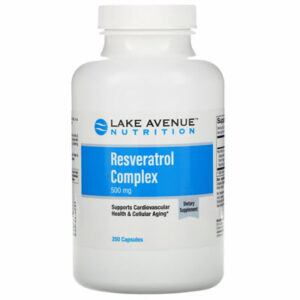