Saffron is one of the most valuable spices in the world because of its unique smell, color, and fragrance. It is widely used in the manufacture of cosmetics and the preparation of food, as a colorant, flavoring agent and spice.

In addition, in traditional medicine, saffron has a variety of pharmacological effects and is often used as a sedatives, antispasmodic agent, aphrodisiac, antiperspirant, expectorant, stimulant, stomachic medicine, an anticancer drug, and digestive aid Medicine and cold medicine.

Do you know the benefits of saffron supplements? For more details, see the article below.

Saffron is a perennial stemless herbaceous plant belonging to the iris family, which is cultivated in Iran, Greece, Spain, China, and Turkey.

The commercial value of saffron is its stigmas. Each flower has only three stigmas. It takes 3 years from seed to flowering, so it increases its scarcity.

Its medicinal value depends on the existence of three main secondary metabolites: crocin, picrocrocin, and safranal.

What are the benefits of saffron?

It is a major component of metabolic syndrome, including abdominal obesity, systemic inflammation, insulin resistance, high blood pressure, and hyperglycemia

A systematic literature review and meta-analyses (including 14 randomized controlled trials with a total of 788 participants) pointed out that saffron extract can reduce total cholesterol and triglycerides (but mo significant effect on body weight and LDL cholesterol concentration).

*Conclusion: Saffron may have a positive effect on the regulation of blood lipids, but it is limited by the heterogeneity of the included studies and the small number of samples.

2. Saffron is good for depression

Depression is a potentially life-threatening disease that affects hundreds of millions of people worldwide. About one-fifth of adults have experienced depression, and women are twice as likely to suffer from depression.

A meta-analysis (including 11 randomized controlled trials, a total of 500 patients with mild to moderate depression) pointed out that saffron is significantly better than placebo (for HAM‑D and BDI) in improving depression table, and do not lose to SSRIs (selective serotonin reuptake inhibitors, such as fluoxetine, citalopram), but the optimal dose and duration of treatment are not yet clear.

The underlying mechanism may be related to regulating the levels of certain chemical substances in the brain, including serotonin and inhibiting the reuptake of serotonin in the synapse.

*Conclusion: Saffron (saffron) may be helpful for improving depression but limited by the risk of possible bias, more large randomized trials are needed to support it.

Erectile dysfunction can be defined as the failure to achieve or maintain a penile erection in order to obtain satisfactory sexual performance.

A literature review and meta-analysis (including 6 randomized controlled trials) pointed out that saffron has a significant positive effect on all dimensions of the Erectile Function questionnaire, including erectile function, orgasm function, and overall satisfaction, satisfaction with sexual intercourse and sexual desire.

However, regarding the improvement of semen-related parameter values ​​(sperm density, morphology, and motility), different conclusions have yet to be confirmed.

*Conclusion: Saffron may be positive for improving male sexual dysfunction, but it is limited by the heterogeneity and methodological flaws of the included studies, and more research is needed to corroborate it.

Diabetes is a group of chronic metabolic diseases characterized by a phenomenon in which the body’s inability to produce insulin or resistance to insulin action, or both, leads to an increase in blood sugar.

Diabetes affects many different organ systems in the body and, over time, can cause serious complications.

A three-blind randomized clinical trial (8 weeks, 54 patients with type 2 diabetes) pointed out that compared with placebo, oral saffron extract capsules have the effect of reducing fasting blood glucose, but other indicators such as blood lipid, blood pressure and There was no significant improvement in glycated hemoglobin.

5. saffron is beneficial for premenstrual syndrome

Premenstrual syndrome or premenstrual dysphoric disorder is one of the most common clinical complaints of women of childbearing age. It usually appears 5 days before menstruation and disappears at the end of menstruation. The severity of symptoms varies from person to person.

The underlying mechanism may be related to the serotonergic effect of saffron.

*Conclusion: Saffron extract has a positive effect on improving premenstrual syndrome, but it is limited to a small number of samples and more large-scale trials are still needed to support it.

Alzheimer’s disease is the most common cause of dementia in Western society. In the United States, about 5.5 million people are affected, and the estimated number of patients worldwide is as high as 24 million.

Alzheimer’s disease is characterized by progressive cognitive decline. It usually begins with impaired ability to form recent memories, but it inevitably affects all intellectual functions, leading to the gradual loss of basic functions of daily life and premature death.

The root cause of these multifaceted changes is unclear, but age, genetic and non-genetic factors are believed to play an important role.

A randomized and placebo-controlled trial (a 16-week, 46 patients with mild to moderate Alzheimer’s disease) pointed out that compared with placebo, saffron extract capsules produced a significant improvement in cognitive function (Measured by ADAS-cog and CDR scales), and there were no significant differences in adverse events observed between the two groups.

*Conclusion: For patients with mild to moderate Alzheimer’s disease, the use of saffron extract capsules can help improve cognitive function, but limited by the small sample size, more experiments are still needed to corroborate.

Are there any side effects of saffron?

High doses can cause poisoning, including yellow skin, eyes, and mucous membranes; vomiting, dizziness, bloody diarrhea, bleeding from the nose, lips, and eyelids, numbness, etc., which may be serious or even fatal.

1. Do not use if you are allergic to Lolium, Olea, and Salsola plants, as it may induce allergic reactions (eg urticaria, nasal congestion or difficulty breathing)

2. Pregnant women may cause uterine contractions or bleed, which may lead to miscarriage.

3. Do not use it for breastfeeding women (because the relevant safety is unknown).

4. Do not use in patients with bipolar disorder, which may trigger excitability and impulsive behavior (mania).

5. Do not use it for patients with cardiovascular diseases. Saffron may affect the rate and intensity of the heartbeat and may cause symptoms to worsen.

6. Do not use in patients with hypotension. Taking saffron may make hypotension worse.

7. The use of high doses (200 to 400 mg/day) may cause a slight reduction in red blood cells and platelets (but these changes are within the normal range).

Where to buy the most recommended saffron extract capsules? 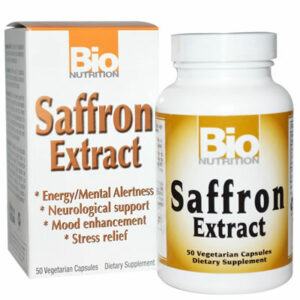